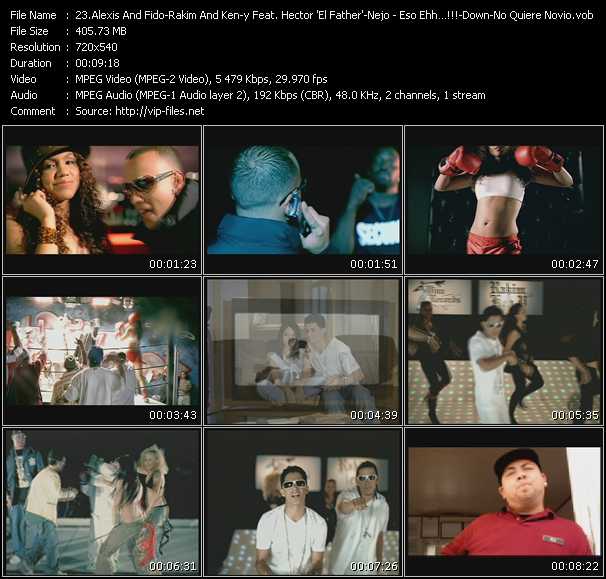 Other Latin-Music Videos of Alexis And Fido

Although relatively new in the reggaeton scene, Alexis y Fido, also known as the "Pitbulls", have made a name in sandunguero very fast mainly due to using funny wordplay and striking ambiguities in their songs. Raúl Alexis Ortíz and Joel Fido Martínez, Alexis y Fido, met due to a great success of the song "El Tiburón" ("The Shark"), which appeared in the "Más Flow 2" album produced by Luny Tunes. First music debuts of Alexis & Fido Alexis was born in Cidra, Puerto Rico, and grew up there as well as in a neighboring village of Cavey. He entered the reggaeton scene 1994 when he worked on the production of "DJ Stefano Vol. 2" album together with his two friends from the neighborhood. However, he was so frustrated with the toughness of this business and apparent impossibility of making it in the world of music that he swore to himself to stay away from recording studios for five years. At the same time, Fido began realizing his musical dreams in his place of birth when he was only 11 years old. However, just like Alexis, he took a several year break from the music business due to the tough competition that disappointed him at that time. He made up his mind to have a comeback, though, as he became interested in reggaeton. Despite several small successes, like appearance in the "DJ Stefano" album or in "Little Boy" of "The Underground 3" of DJ Nelson, that he achieved in 1995, Fido decided to leave the music business again out of frustration and signed up for four years in the US-Army. Alexis y Fido as childhood friends of Wisin y Yandel While Fido served in the army, a good friend of him from the childhood Yandel got to know Wisin and formed a successful duet with him, which is known under the name of Wisin y Yandel. Meanwhile, Alexis who was a friend of Wisin decided to get back into the scene in the year 2000 with "Sigan Perreando" and "Otras Noches Más" in "La Misión 3" album and the hymn in sandungueo, "Mano Arriba" in the "Grayskull" record. He also worked on a special production of Wisin y Yandel's "De Otra Manera" album as well as the current single productions of these two rappers. Formation of the duet while recording for "Desafío" It was during the production of "Desafio" album that Alexis and Fido decided to join their potential. They chemistry seemed to be right from the start, so they decided to form a duet. They demonstrated their talent in such songs as "Gata Racing" for the "Blin Blin Vol. 1" album and "El Palo" for "El Band 2 Korrupto".

Héctor Delgado Román (born September 14, 1979) is a Puerto Rican former reggaeton recording artist and producer, formerly known by the artistic names Héctor "El Father" and Hector "El Bambino". He announced his retirement in 2008 but had a series of "Farewell Concerts" that went until May 2010. He rose to fame as a member of the duo Héctor & Tito. As a producer Delgado has worked with several reggaeton producers, as well as Emilio Estefan.

R.K.M & Ken-Y, is a Grammy Award-nominated reggaeton duo formed in 2003 by José Nieves (R.K.M.) and Kenny Vázquez (Ken-Y). They began their carrer in 2003 under the tutelage of Chencho (part of the duo Plan B), who introduced him to Notty Play, appearing in the compilation that looked for to sponsor and to give greater publicity to multiple novice artists The Draft 2005. In 2013 Raphy Pina, president of the company Pina Records announces the separation of the duo, and the publication of albums as soloists; To the time after both leave Pina Records to publish their albums under their own record companies. In 2017 announced their official return by Pina Records and at the same time launching the remix version of the theme Más Que Ayer next to Arcángel & De La Ghetto.