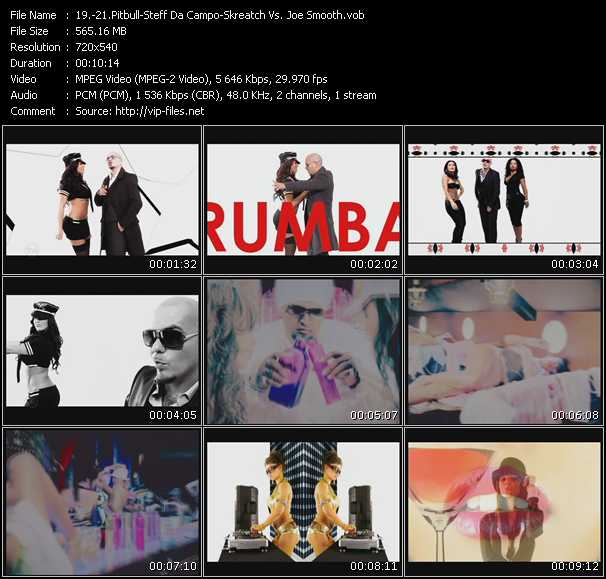 Other Latin-Music Videos of Pitbull

Pitbull Feat. Ne-Yo, Afrojack And Nayer video Give Me Everything

Usher Feat. Pitbull video Dj Got Us Fallin' In Love

Armando Cristian Pérez (born January 15, 1981), better known by his stage name Pitbull, is an American rapper, songwriter, actor and record producer. His first major appearance was on the Lil Jon album Kings Of Crunk in 2002. In 2004, he released his debut album titled M.I.A.M.I. (short for Money Is A Major Issue) under TVT Records. He followed with El Mariel in 2006 and The Boatlift in 2007. He then signed with RCA Records and released Rebelution. Planet Pit followed in 2009.

House/Tech-House DJ & producer from Leeuwarden, the Netherlands. Founded his own label SDC Records in 2007.

Born May 9, 1964. Joe Smooth is one of the American pioneers of the style of music known today as house music. He is a self-taught musician who, from the age of 12, has been creating music that is inspiring to all that his sound has touched. In 1985 he joined the DJ International family and quickly became a central force behind everything written or produced from the visionary label. He has worked with such artists as Frankie Knuckles, Marshal Jefferson, A Guy Called Gerald, Lil Louis, D'Bora, Tyree Cooper, Fast Eddie, Fingers Inc., The Art Of Noise, Sterling Void, The Pet Shop Boys, Janet Jackson, Brian McKnight, Atlantic Starr, The Style Council, New Order, Steve Hurley... and The List Goes On. At the age of 16, Joe Smooth began having house parties and DJing throughout Chicago's underground music scene. At 18, he opened his first night club called east Hollywood Mannequins. In 1983, Joe began DJing at the famous Smart Bar nightclub and created an atmosphere and mystique that still lives today. In 1985, the limelight contracted Joe for their Chicago nightclub as musical coordinator. In 1987, he also started working for the soulful Charlie club nightclub as head DJ/musical coordinator. In 1988, with musical production work building and travelling abroad Joe Smooth left the club scene for a short break to put his concentration fully into his productions. In 1990, Joe Smooth saw a need for a serious underground house club in Chicago and opened the Warehouse nightclub, named in tribute to the legendary Warehouse nightclub of the early eighties. Joe Smooth looking for new horizons ventured to Rome to work on a label idea with producer Claudio Donato "Active Bass Music" distributed by the now dissolved flying records network. Through the nineties till present day Joe Smooth has done extensive work with Slang Music Group and Nu Soul. Joe's work at Slang and Nu Soul would include projects featuring Whitney Houston, Donnell Jones, Destiny's Child and Sisqo to name a few. In 2015 he started his own label Indie Art Music (indieartmusic.com)