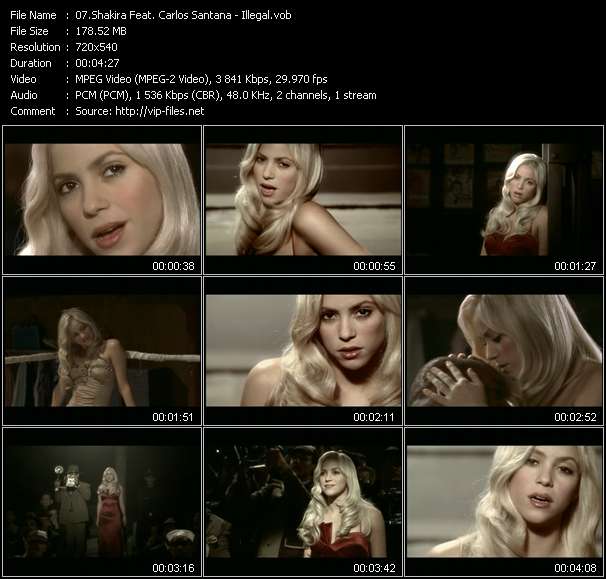 Other Latin-Music Videos of Shakira

Shakira video Whenever, Wherever (Remix)

Shakira Feat. Lil' Wayne video Give It Up To Me

Colombian pop singer, born on February 2, 1977 to a Colombian mother of Spanish-Italian descent and an American father of Lebanese-Italian descent. Shakira is known for a high IQ and is fluent in Spanish, English, Italian and Portuguese. Writing songs and belly-dancing since childhood, her first album was released when she was a mere 14 years old. Other Spanish-language albums followed, each faring better than its predecessor, but it was not until 2001 that she achieved a world-wide breakthrough with the English-language "Laundry Service" album.

Born 20 July 1947, Autlán de Navarro, Jalisco, Mexico. Santana is a veteran guitarist noted for his distinctive Tijuana jazz-influenced playing style. Born in Mexico, but resident in the USA from childhood, he has been the leader of the group Santana since 1966. Originally the 'Santana Blues Band' they debuted, as Santana, at Bill Graham's Fillmore West theater in San Francisco on June 16, 1968. His performance was recorded on film at the Woodstock Festival in August 1969 and, after the breakup of this original group, he worked and recorded with drummer Buddy Miles. Carlos then formed a duo with John McLaughlin, becoming a follower of guru Sri Chinmoy who countenanced them the titles 'Devadip' (the eye, the lamp, the light of God) and 'Mahavishnu' respectively. This duo recorded "Love Devotion Surrender" together. 'Devadip' Carlos Santana then worked with another religious disciple, Turiya Alice Coltrane, widow of John Coltrane. He ended his relationship with Chinmoy followers in 1982. From 1974 to 1999 Santana performed with a host of renowned musicians, regularly releasing albums over the years. Under his own label, Guts and Grace, he released a collaborative album, Brothers In June 1999 he released Supernatural, the biggest hit of his career, winning eight Grammy Awards. In 2003 Rolling Stone magazine listed Carlos Santana at number 20 on their list of the 100 Greatest Guitarists of All Time. In 2013 Carlos Santana earned the distinction of becoming a Kennedy Center honoree for his contribution to the arts. Carlos Santana teamed up in 2016 with two of the greatest living jazz musicians, saxophonist Wayne Shorter and keyboardist Herbie Hancock, in a new jazz-rock collective called Mega Nova that gave its debut performance on Wednesday, August 24 2016, at the Hollywood Bowl in Los Angeles. The group also features respected jazz bassist Marcus Miller and Carlos' wife/current Santana drummer, Cindy Blackman Santana.